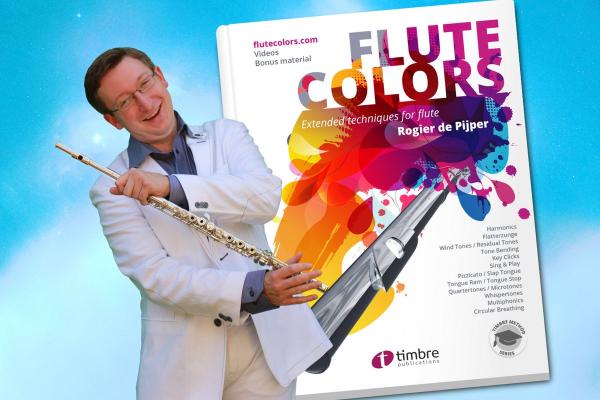 by Yulia Berry at 21 June 2017
"For me music is a way to express myself. It is a language that says much more than all the words of the world all together. After a concert people often come to me and tell me they liked the concert. If they have a smile on their face I’m happy, if they also have twinkles in their eyes I truly achieved my goal. Besides that I hope to inspire as many people as possible." (Rogier de Pijper)

Interview with Rogier de Pijper, Dutch flute player, author of "Flute Colors", extended techniques method
Yulia Berry: Hello Rogier! Could you, please, tell me why you chose the flute over the other instruments?
Rogier de Pijper: What I liked most about the flute was the sound. The beautiful clear sound. When I was a kid there was this famous Dutch flute player. She was on television all the time, also quite an entertainer. I visualized myself playing the flute on stage and felt a certain sense of freedom. I played the recorder for 11 years on an advanced level and I was already taking piano lessons. But my parents couldn’t afford also flute lessons, as it would be too much. So I borrowed a flute from the neighbours and started practicing myself. During the years I had a flute lesson once a year with the famous Dutch flute player. I liked the flute better then the recorder because the flute has so many more possibilities, for example dynamics and colors. And a fun fact: my last name is ‘de Pijper’ - it means ‘flute player’ in Dutch. So maybe it was destiny.

What do you think is your role in the world of music?
For me music is a way to express myself. It is a language that says much more than all the words of the world all together. After a concert people often come to me and tell me they liked the concert. If they have a smile on their face I’m happy, if they also have twinkles in their eyes I truly achieved my goal. Besides that I hope to inspire as many people as possible. I feel the path of music is similar to the path of life. I like to see it that way. I feel musicians should smile more, don’t take themselves too seriously, but laugh every now and then. Then you relax more and achieve much bigger goals. The same goes for life.
Is there another art that inspires your flute playing?
Poetry is one of the art forms that inspires me. I feel it is similar to music making. A lot of layers. If a composer adds some text, it helps me. And paintings also do help to interpret a composition. When I play, I often think in colors and pictures. It helps me to find the right feeling I would like to express.
Do you think it is important for a performer to have a wider cultural horizon?
Yes, yes, yes, I can’t express how important it is. If you truly want to understand a composition, you should know as much as possible about the composer, time period, circumstances in which the composer lived, country, city, politics of that time, other artists and their works. Everything you can think of. That’s why I love working with (living) composers. They can tell you how they want their composition to sound. Notation is one thing, but sometimes they mean a different thing and then it is nice to be able to talk about that. If a composer doesn’t live anymore, you have to find as much information, as possible.
You are an expert in extended flute techniques and your method "Flute Colors", in which you teach various techniques, along with specially written exercises, pieces and a series of videos have become very popular among flutists and flute teachers. What extended techniques are out there today and do you have your favorite ones?

In the book I made a selection of the techniques I feel are the most important: harmonics, flutter tongue, wind tones, tone bending, key clicks, singing and playing, slap tongue, tongue stops, quarter tones and microtones, multiphonics and circular breathing.
Personally I love wind tones. It is such a beautiful effect on the flute and it makes your embouchure extremely flexible. They give me a feeling of freedom.
What are the newest pieces you wrote for "Flute Colors"?
I try to make lots of arrangements of known pieces and studies. I choose those pieces because often we already know the melody so we don’t have to focus on that. You can keep all the attention to the technique. I especially like the arrangements of the studies because if you study the Flute Colors version besides the regular version, you can tell the progress is much bigger, compared to only studying the regular version. There are already 46 arrangements by now. The newest pieces are ‘Long long ago’, warming up exercises on ‘Viva la vida’ by Coldplay and a study by Hugues.
Do you think those flutists who are not into contemporary music should still learn extended technics?
Yes, I think they should. Studying extended techniques helps you broaden your horizon. If you use them as an extra tool to work on the problems you face while playing the flute, your flute playing will improve more and faster. I like to tell students: ‘If you can do it, then you have a choice and you can choose not to do it. If you can’t do it, you don’t have a choice’. For me it is very important to experience freedom. If I have an idea, I want to be able to implement it. The flute or the technique should not be an issue. Therefore I want to master the flute completely. Studying extended techniques helps me, because you have to seek for extremes.
You often perform world premieres of the newest music. What premiers were the most recent ones?
Last year I premiered a sonata for flute and piano by Sandro Fazzolari (Italy). A beautiful piece containing extended techniques. The techniques are used as an extra color, not as a trick. I like that.

Most recently I played the world premiere of ‘Effervesce’ for flute and prepared piano by Gregory Glancey from Boston, a beautiful piece. The composer also used extended techniques as an extra color. Combined with the prepared piano, it is fantastic and exciting.

And how does the audience accept the contemporary music, written in the XXI-st century?
It is tricky I must say. I think it is very important to help the audience to understand the music before you start to play. During both world premieres I described the composers, who were present. I let them talk to the audience and explain their thoughts. So they told the listeners what they could expect. If people understand what they are listening to and they have the feeling you respect them by explaining what they hear, they will like it in the end or at least will be willing to listen to the music and respect it. The premiere of the sonata by Fazzolari was attended by 300 people. Many of them don’t even really enjoy listening to classical music. But Sandro told about the composing process and we had a conversation on stage together with a lot of humor. The duration of the piece is 17 minutes, people in the  audience were quiet till the last second and we got a standing ovation immediately after the piece.
Who are your favorite composers?
I really like the pieces Sandro Fazzolari and Gregory Glancey wrote for me. So maybe they are my favorite composers now. But I like a lot of music. It depends on the moment. I also love to play music by Mozart, Jolivet, Bach, Edward German, and so on. I don’t really have a favorite composer.
What is the fundamental repertoire that a flutist should play?
Play as much as you can. I like being flexible (it’s a theme, I know…). So I think flute players should play pieces from all different time periods. Sonatas by Bach, Mozart concertos, Schubert, Beethoven, Fauré, Gaubert, Jolivet, Boulez, Stockhausen, Dutilleux, Piazzolla, Sancan. There are so many great pieces. Keep searching for pieces you don’t know yet.


How important it is for a flutist to have an expensive flute?

That is an interesting question. I always have to think of an interview with sir James Galway. He tells about a CD he made with 7 different flutes, silver ones, golden ones. When the recording was done he couldn’t tell himself on which flute he played which piece.

I think the flute player makes the flute player, not the flute. We sound like ourselves. That is most important. The flute should never be an excuse, because the flute only does what we tell it to do. Of course there is a difference between a cheap flute and an expensive flute. And the flute should be in good shape, no matter if it is a cheap flute or an expensive one. Silver flutes and golden flutes do sound different of course. Most of the time they have more possibilities for the player to explore. But it really depends on the flute. I would say if you want to buy an expensive flute because playing it gives you the feeling that a whole new world has just opened up, buy it. If you want to buy it because you just think expensive is better, don’t buy it.

Is it possible to learn how to make a good sound on a regular flute?

Yes, considered the flute is in good shape. So no leaking pads for example. Sound should be shaped inside your head. You have to ‘hear’ your sound before it comes out of the flute. That’s why it is important to listen to other musicians (not only flute players). You have to create the sound, visualize it. Find out what you like. And then hear it before it sounds. Then the kind of flute you are playing isn’t really important. If you can do it on a regular flute, it will be easy on a professional flute.

Some people say that listening to a solo flute is not as great as listening to the flute playing with other instruments. What would you tell such people so that they get interested to listen to flute solo pieces?

I think again we have to help the listener a bit. Tell them about the piece. What can they hear? Why did the composer write it like this? What is your feeling while playing the piece?

Some composers and performers give intelligent answers to interviews. However, their compositions or performances are not as great as their interviews promised to be. What would be your explanation for this phenomenon?

That’s a hard one! Truly hope I’m not one of them ☺ This question makes me wonder… did the composer compose from his heart? Did the performer perform from his heart? Did they respect the listener? Did they prepare the listener well enough? I truly believe you can play everything as long as you respect your audience by helping them understand the new music. And by making sure there are enough other pieces (in different styles depending on the audience) to diversify the program. And never ever take yourself too seriously.

And the last one: Is there a question you wished to be asked and you haven't been asked? If so, please formulate it and answer it.

I really loved your questions. They challenged me to think about these topics. Very interesting. Thank you very much, Yulia!

Thank you, Rogier! I really enjoyed our conversation and wishing you all the best! 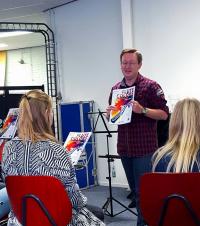 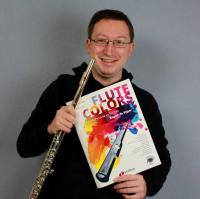