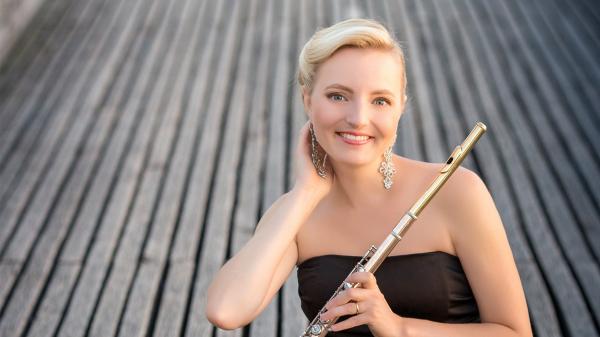 by Yulia Berry at 10 November 2019
"I dream that as many children and people as possible would be engaged in music and/or art. People will always be drawn to the beautiful and if I can inspire and motivate someone to develop their creative abilities, then I live my life not in vain." Sofia de Salis

Yulia Berry: Hello, Sofia! First, congratulations on the release of your new album "Shades of love", the second album after the highly praised "French Impressions" of 2017! "Shades of Love" has been a great success - your beautiful talent has received amazing reviews from music critics and media and lots of love from flute fans! How did you come up with the concept of the album and the title?

Sofia de Salis: Hello, Yulia! Thank you! Often people love to listen to music that they know well. The flute repertoire includes many fine pieces and is the largest one among all wind instruments. I really wanted to show famous music in completely new interpretation and colors.

All the works presented on the disc are arrangements for flute and piano from vocal, piano, violin, cello and even oboe repertoire.

In addition, each work, and the history of its creation in this album in some way is  connected with the theme of Love. And love is one of the most healing and beautiful emotions.

Could you tell us more about the recording process? Who helped you with this project and where was it done?

The record, like any project, is first of all a huge work of a large number of people. For me it is absolutely equal duet and synergy with the great pianist Iryna Krasnovska. The recording took place in Germany in the city of Wuppertal. We recorded the entire album program in 3 days and the disc was released by ARS Production, the winner of the “Label of the Year (2019)” of International Classical Music Awards (ICMA). I am very grateful for the tremendous work and support of Manfred Schumacher, Annette Schumacher and Krystian Nowakowski, as well as everyone who has somehow worked on the creation of this disc.
At what age and why did you choose the flute?

My father is a third-generation artist, and my mother is a singer. I grew up in an artistic environment and began to study music at 4 years old with the then-famous teacher and pianist A.D. Artobolevskaya. At the age of 6 I heard a flute at one concert and absolutely fell in love with this instrument. I told my parents that I want to play only the flute. This is love for the lifetime and it seems to me that it is mutual.

You grew up and studied in Russia, but then continued with your studies in Switzerland, at the Conservatory of Basel, in the class of Felix Renggli - a great flutist and teacher. How different were your learning experiences? Do you have any memorable story about that time?

I was very lucky and in Russia I had wonderful teachers. I am still very close to my teacher, a wonderful flutist Igor Petrovich Trunov and consider him to be my second father.

I decided to study in Switzerland after I heard for the first time Emmanuel Pahud in Moscow. It was just a phenomenal concert that impressed me so much and, I am not afraid of this word, changed my life. Never before have I heard such a perfect flute playing and I really wanted to learn how to play as beautiful. At that time I did not know exactly where I would like to go, but I knew it would be Europe. I came to Basel to take exams in the class of Professor Felix Renggli. There was a very big competition to study with him, I don’t remember exactly - about 30 or 40 people for one placement, which I won, but luckily I didn’t know about it, otherwise I would have got too nervous.

Could you tell us more about interesting people and musicians you met there and collaborated with?

One of the most memorable moments in my musical career was working with the outstanding flutist and musician Aurèle Nicolet.  And now I even live in the city where he was born. The cultural and musical life in Basel is very, very exciting. I was also lucky to work with such musicians as Pierre Boulez, Krzysztof Penderecki and others.

You come from an artistic family - your father is a famous Artist. How does Art influence and inspire you in your Music Artistry?

As a child, I drew a lot and didn’t even know, if I would be more interested in music or drawing. The world of art is very peculiar, it is very different from the music one. Artists can see people and everything around them in a very special way, they can admire the insertion of the ears, the structure of the skull.
It seems to me easier to work with images and colors in music, because I am used to seeing everything from many different angles.

What qualities should a great musician possess?

Love for music and the ability to concentrate

Do you have your favorite flute repertoire? Are you planning to perform music of  living contemporary composers?


I also want to congratulate you on your incredible work and input into organizing and promoting music festivals and competitions for young flutists in Switzerland and Russia. What do you think motivates young musicians of today to master their fine flute skills, instead of spending hours on social media or playing video games?

Thank you so much! Yes, I dream that as many children and people as possible would be engaged in music and/or art.

Once inspired by a concert myself, I dedicated my life to music. By organizing competitions and festivals, in this case I popularize the flute as one of the oldest and most beautiful instruments.

I think when the kids hear their peers play so well and have success and universal admiration, they may want to join this world, dive deep into it and then just forget about video games and social networks.

People will always be drawn to the beautiful and if I can inspire and motivate someone to develop their creative abilities, then I live my life not in vain.

What advice would you give to them?

You were appointed as Artistic Director of the Giez Festival (Switzerland). Could you, please, update us on the Festival?

I was invited to take this position by Christiane de Muller two years ago. We worked great together as a team. I admired her energy and enthusiasm and learned a lot from working with her. The Giez Festival was a kind of club where besides having amazing concerts with the best musicians of Europe, there were various exhibitions and an extensive cultural program -  a real  quintessence of various arts. The key word in creating something is synergy, and when people combine their efforts together, amazing things do happen. That was our collaboration!
Despite the very sad fact that Christiane passed away this year, I continue her work, developing and implementing our vision, ideas and plans in various projects and events in Switzerland and Russia.

One of the projects I got involved into in 2019 was the biggest flute festival in Russia “Great Flute Days”, where I was a managing director and a jury member. We started with an international online competition and had a fully sold out Gala concert of the winners in Moscow, along with masterclasses, performances, exhibitions and lectures. The Festival was supported by The Russian Ministry of Culture and received a great coverage in media.
Now you live in Switzerland with your family. What do you like about this country?

Switzerland is famous for its nature, its landscapes. I have a beautiful view of Alps and a lake from my window! There are simply amazing landscapes. I like everything here!

I consider myself a citizen of the world, but my heart will always belong to two countries: Russia and Switzerland.

Last year you collaborated with Web Flute Academy, as a Guest Teacher. What do you think about this form of teaching? Do online courses, workshops and webinars work?

In the near future, most of the training will be online. Web Flute Academy is one of the most innovative flute projects along with the All about flute app. It was a great honor and joy to work on this project. When the newest technology is combined with creativity and knowledge, it takes the traditional ways to teach and study music to a completely different level, helps to easily connect musicians from different parts of the world and is very exciting for both, a teacher and a student.
What are your future upcoming plans?

This season I have planned a lot of concerts, both in Europe and in Russia, to perform different programs with Iryna. I will also conduct master classes in Russia and Europe and participate in various competitions as a jury.

Thank you so much for such interesting conversation, dear Sofia! I wish you the best of success in all your projects!

Thank you very much, Yulia!
Internationally recognized Russian-Swiss flutist, Sofia de Salis has established herself as a soloist with exceptional musicality and a rare quality of sound. She is a sought-after guest artist at international festivals such as December Evenings (Moscow), Festival de la Côte and Stars at the Rhine (Basel). In 2018, Sofia de Salis was appointed as artistic director of the Giez Festival (Switzerland).
Her debut album French Impressions, released in 2017, was received with enthusiasm and praise by the public and critics alike. It has been broadcasted by major classical radio stations throughout Europe and was selected as “CD of the Week” by Berliner Kulturradio RBB.
After having launched the International Competition for Young Performers in Val-de-Travers (Switzerland) in 2017, Sofia de Salis continues to participate in the development of the next generation of flutists through her involvement as a judge in competitions in Russia, Switzerland and the USA. She also passes on her experience to the younger generation through master-classes around the world.
Sofia de Salis studied at the Moscow State Tchaikovsky Conservatory, where she obtained a concert diploma with distinction. She perfected her training at the Conservatory of Basel in the class of Felix Renggli, where she obtained a concert diploma and an education diploma. She also worked with Renata Greis-Armin, Aurèle Nicolet, Ransom Wilson, Oleg Khudyakov, Bartold Kuijken, Rachel Braun, Pierre-Yves Artaud, Andras Adorjan and Jacques Zoon.
To enrich her musical experience in the field of Baroque, she followed the traverso course given by Oskar Peter at the Schola Cantorum Basiliensis. Her interest also extends to modern music and Sofia de Salis performed works by contemporary composers such as Pierre Boulez, Edison Denisov, Sofia Gubaidulina, Jost Meier, Jürg Wittenbach and Samuel Ducommun, some of whom she had the opportunity to collaborate with.She performed as a soloist and in orchestras in internationally renowned venues such as the Great Hall of the Moscow Conservatory, Theater Basel, Casino Basel, Carnegie Hall in New York, Kennedy Centre Washington and Tonhalle Zurich under the direction, among others, of Gennady Rojdestvinski, Krysztof Penderecki, Vladimir Spivakov and Valery Polyansky. She collaborated with various orchestras, including the Moscow Philharmonic,Neues Orchester Basel, Orchestre Symphonique Bienne-Soleure, Orchestre des Jardins Musicaux and the Moscow Camerata. 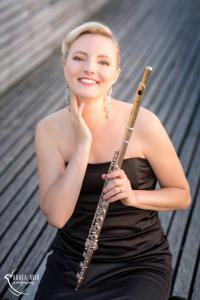 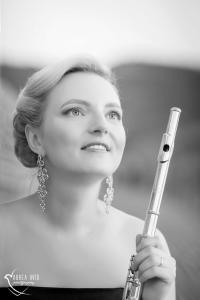 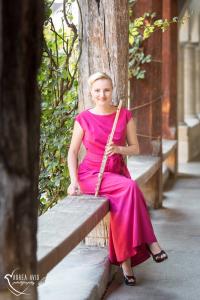 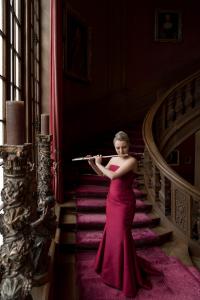 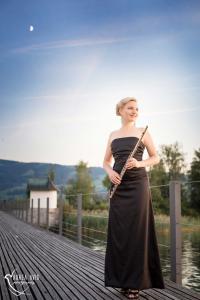 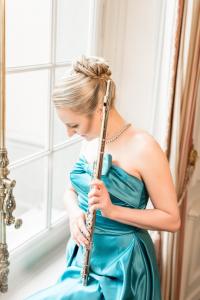